How to Avoid Frozen Pipes This Winter

The winter months are quickly approaching and along with the cold weather comes major plumbing concerns… Frozen pipes can result in a messy and costly situation. During a deep freeze, however, there are ways to prevent this disaster from occurring.

Why are frozen pipes dangerous?

Not only do they create a serious inconvenience, but they may cause major damage to your property. Frozen pipes are problematic for two reasons:

Certain piping is more susceptible to freezing than others…

Some signs of frozen pipes…

If a pipe bursts, DO NOT PANIC…

The first thing to do is shut off the main water line into your property. This will prevent your house from flooding.

5-STAR GOOGLE REVIEWS FROM OUR CUSTOMERS

Had Zeek check out my sump pump. Guys showed up early and were very nice. Very knowledgeable and not pushy about offering services. Would definitely recommend them to others.
Thomas C.
I woke up to a pretty big leak in my basement. I called Zeek Plumbing around 8am and they were at my house within 2 hours. Tim did and excellent job and also took the time to explain to me what happened and how to prevent this from occurring again. Very professional company.
Mike D.
Had no heat, they had a crew out within a few hours. Explained everything, issue fixed promptly. Nice & friendly guys and not overly priced. Would definitely recommend and use again if need arises.
Nadine C.
We used Zeek a few weeks ago for a clogged pipe. At that time we noticed a leak in our septic pipe in the basement. So we asked them to give us a price to replace the pipe. The price sound reasonable so we set it up for them to come back. Tim, Rj and Rich where here 8:00am sharp and went right to work. We where only without toilets for a few hours. They did a amazing job and where finished by 3 pm. All 3 guys are extremely professional and and very friendly. They work well together and all enjoy what they are doMy wife and I would highly recommend them.
Scott Campbell S.
We had a septic pipe clog. My wife called and talked to Steve. He was very friendly and got back to us within a few minutes with a time they would be here. It didn’t take them long and where right on time. The two guys where professional and got right to the problem. We need a few other things done so we will be calling them again. I highly recommended Zeek plumbing!!
Scott C.
Great job done and great customer service!
Daniel D.
Very professional, the plumber did a great job the back office was friendly
Dennis B.
We had a pipe leaking in the basement. Tim showed up in a very timely manner. He was very efficient and honest. We would highly recommend Zeek Plumbing!
Mrs. C.
Super Bowl Sunday morning, Zeek Plumbing didn't hesitate to respond when we called them for assistance. Our bathroom backed up and flooded our basement causing us to make an emergency request to them. They were at our home immediately and saved the day!
Jennifer F.
These guys were fantastic. Friendly, knowledgeable and very accommodating. They came to fix one problem and wound up fixing three. Price was extremely fair as well. I would recommend Zeke 100%
Kevin S.
I would highly recommend Zeek. They were trustworthy, prompt, and courteous. I was nervous about being taken advantage of and they were absolutely above board. They will always be my first call!
Meghan L.
Zeek Plumbing was very professional and has solved a furnace problem that was never resolved before. They troubleshoot and explain everything in detail . I would highly recommend them .
Donna L.

Proudly serving residential and commercial customers throughout Morris County and all of New Jersey. 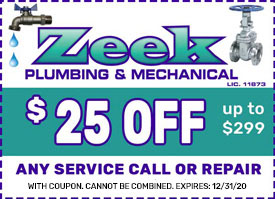 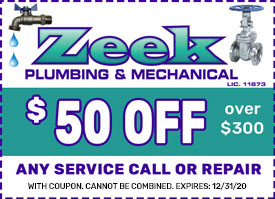 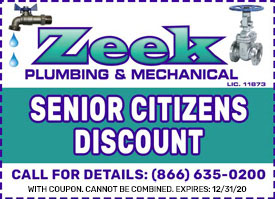